If you’re a big fan of dance competitions or like watching ‘Dancing With The Stars’ this might interest you. I’m sure you’ve seen people on the show dance the swing, right? Well, here is one ‘Big Boy’ who’s got the moves! Not only has he got the moves…he teaches the moves and has one several competitions in the past. You’re going to want to see this! 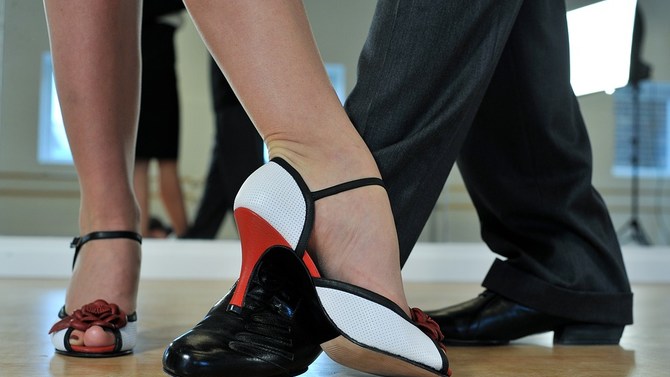 An overweight dancer shocked his audience after he revealed his amazing dance skills in a competition (video below).

In the clip, John Lindo can be seen participating in a West Coast Swing dance number with his partner, Deborah Szekely. The two engage in a tight, impressive routine, blowing the audience away.

Later in the clip, the audience gets up on its feet and gives the couple a huge round of applause as they show off their moves.

Many viewers applauded the dancer for working hard to become an incredible performer, even though he’s a large man.

“Good for him there’s no reason why he can’t do what he loves and that’s awesome seeing that just gives a push to remind people do what you love awesome job,” one viewer commented on The Shred’s Facebook page. “He’s a great dancer,” another wrote. “Why say ‘seemingly overweight’?… I’m sure he knows it and isn’t playing games with words.”

“I consider this the my favorite [West Coast Swing] video…just great both of them,” wrote one reader in the comments section of the YouTube video of the dance routine. “There are lots of more technical, better arena, more complicated performances but every time I see this one it just looks right. This is dance for me when ‘the connection’ is there. John is my favorite only because I am a leader too.”

“Best I have seen in a long time just great,” another viewer commented.

“Big boy has moves!” wrote another. “I love watching dance competitions and haven’t seen him but I will watch for him now.” One viewer shared a story of taking a dance lesson from Lindo.

“It’s West Coast Swing, it’s a lot of fun to dance,” the viewer commented on the YouTube video. “I took a lesson from John Lindo last weekend in Fresno. Awesome and very funny dancer, he really emphasizes dancing to the music. Let the follower know that you’re dancing to the music and not just the dance. What he’s doing though is pretty hard too, so get comfortable with the dance first. West Coast Swing does take some time to perfect.”

According to Lindo’s website, he has won multiple awards on the dance circuit — including first place finishes in the U.S. Open, Grand Nationals and Phoenix Champion of Champions competitions — in addition to teaching dance internationally. He lives in New Jersey and is active in New York City’s dance scene.

John Lindo is Pretty Amazing!!! He’s DEFINITELY got the moves!

So next time you’re watching dance competitions, remember Lindo…he won’t be hard to miss because although he is one BIG guy, he is also one amazing dancer!